Last week, the Y13 English Literature students enjoyed an evening at the cinema, viewing a broadcast of a live theatre performance of Oscar Wilde’s An Ideal Husband, one of their set texts for A Level.  The play follows prominent politician Sir Robert Chiltern as his marriage is threatened when a dark secret from his past resurfaces.   It starred Frances Barber as the villainous Mrs Cheveley and Freddie Fox as the hero/dandy Lord Goring (with his real-life father Edward Fox playing his father in the play).  Both of these performances proved to be hits with the students, and their impressions of the play below make up a wide-ranging and perceptive review.

Jonathan Church’s 2018 production of ‘An Ideal Husband’ embodied the satire prevalent in Wilde’s work, in particular through Freddie Fox’s performance as Lord Goring.   Emily B

I really appreciated the opportunity to see the play in performance, particularly the production aimed at imitating performances given during Wilde’s time Jess W

The trip to see ‘An Ideal Husband’ performed live really brought the written text to life, consolidating what we have studied and discussed in class.  Victoria T 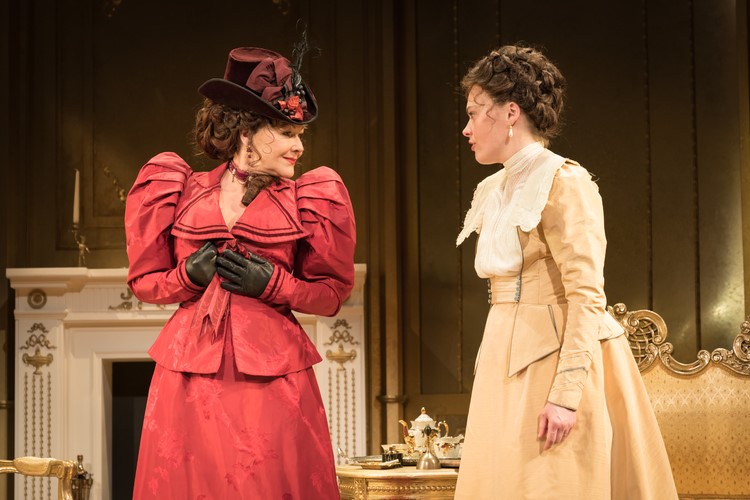 I found the play an interesting interpretations of Wilde’s work, focussing on his delightful epigrams and excellent comedic skill.   Rosie M

[The changes to the play are] particularly useful for A Level English as it reflect how the context in which a play is performed affects the way on which the director chooses to portray it.  Izzy A

Mrs Cheveley’s character was particularly interesting as she came across as predatory and satanic in her extravagant red dress and imposing behaviour.  Khadija S

Barber’s costumes were predominantly in line with Wilde’s text, particularly her heliotrope dress.  Her red dress in Act II nicely contrasted with Gertrude in white, further emphasising the personification of evil.  Charlotte G

Mrs Cheveley seemed like a pantomime villain at times, especially with her cackling laugh and over-the-top villainous persona. Harshita T

Mrs Cheveley was presented with a slightly more comic attitude – more of an exaggerated villain as opposed to how Wilde presented her in the text.    Sanjana K

Mrs Cheveley’s makeup and dresses were very bold, and as described in the play ‘unnatural’.  Mariam M

Mrs Cheveley’s look of ‘evil triumph’ was more a grin that could be seen from across the street, and in verging on pantomime villainy in this, she induced a wave of giggles from amongst the audience. Polly J

An aspect that seemed to be controversial was the age range of the actors playing Mrs Cheveley and Lord Goring; their flirtatious tendencies had a discomforting effect on the audience.  Isra B

The way in which the actors’ body language mirrored one another, climaxing at the point in which they laugh in each other’s faces after a somewhat uncomfortable flirtation, added to the humorous interdependent hero-villain relationship. Ruqayyah K

The removal of the sexist comments made by Lord Goring in the production meant that, by catering for the sensibilities of a modern audience, Jonathan Church made Lord Goring a more likeable character, but in doing so removed much of the seriousness of his words. Bethan M

I found the decision to cut some of Lord Goring’s more misogynistic lines to be an interesting choice and felt it was more in line with a modern view of morality.   Becca S

I really enjoyed the portrayal of Lord Goring and how he balanced both the dandy and the philosopher of his character.  Aliyah G

I thoroughly enjoyed the witty remarks made between Lord Goring and his father.  Watching the production has helped me understand the play and form my own opinions to use.   Joan P

Though at times too heavy handed on the humour, Lord Goring carried Jonathan Church’s 2018 production due to his appearance of modernity, drawing further contrasts between himself and his father.  Laura B

What could arguably be seen as arrogance in Lord Goring when reading the play was turned into self-mockery…a highlight for me was when he galloped around Mabel.   Robyn H

The father and son duo, Lord Caversham and Lord Goring were thoroughly amusing, and the connection between them added sentiment and warmth to the production.   Katie W

Goring’s young carefree nature was of direct contrast to his father’s serious disposition, and this juxtaposition posed a sort of communication barrier at times, which was humorous for the audience through dramatic irony.    Mansi V 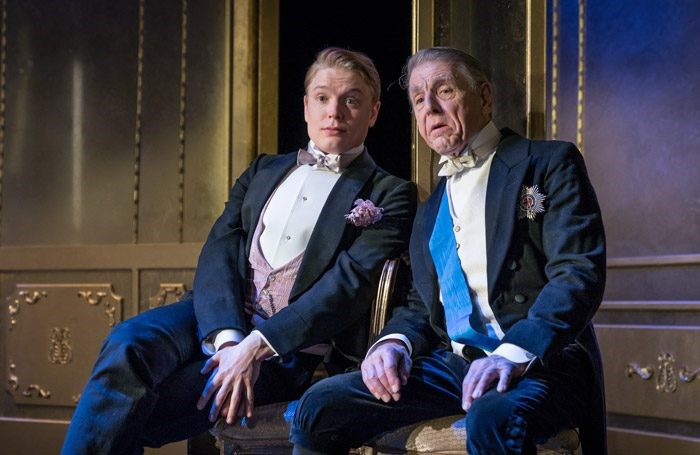 The staging also created interest in the audience: the darkness of the first act contrasted with the lighter scenes later on, showed that there was something to hide or conceal.   Zsofia L

The furniture in Lord Goring’s house was another choice by the production that I thought was quite thoughtful.  The golden furniture on Robert’s house during his dialogue about the joy of power was a contrast to the red furniture in Goring’s house. Anosh Y

Seeing Wilde’s vision come to life really helped me visualise the different character dynamics and construction of the play, whilst also helping me to understand my own perceptions.  Ria S

The play overall was well delivered, especially Lord Goring and Mabel’s witty interactions, which was a nice break from the conflict between Robert and Gertrude.   Melody C

Overall the theatre production was a very good adaptation of his play for the 21st century...the production will be a good source to refer to in my essays.  Harita B

The deeper understanding of the power dynamics between characters will no doubt enrich our ability to meaningfully engage with the text in our upcoming A Level exam.  Caitlin M