Year 10 Visit to Bath - The Museums

On Monday 27th June, Year 10 GCSE Latin and English students took a trip to Bath in Somerset.  The purpose of the trip was threefold.

Firstly, the Latin students took an in depth tour of the Roman Baths in order to support their understanding of Roman life, culture and influence (see the separate article).  Secondly, the English students visited important museums to develop their understanding of contexts of the 19th century novels they are studying for English Literature GCSE (half the year group visited the Jane Austen Centre, and half visited the Bath at Work Museum).  Thirdly, all students (and teachers) were enriched and delighted by the magnificent scenery, architecture and heritage of the city.

The students' impressions are below.

'Bath!  The first city apart from London to have running water!  We went to the historic city on a hot sunny Monday.  The whole trip was very educational and fun, which is a definite added bonus!'

'The day started with a short walk to The Circus, where Mrs Fallows explained the fabulous story behind the amazing architecture.  We marvelled at the Royal Crescent, basking in the sun in all its golden ratio glory.'

'The Jane Austen Centre was three doors down from where Austen had once lived herself - since her house was now a dentist's.  As we approached, I was startled to discover that one of what I thought was two statues standing outside was actually a person: Captain Wentworth.'

'We were captivated by the fascinating story of Austen's life and her family, which was complemented by little nuggets of social commentary and historical context of that time, which Austen had to surpass in order to achieve her literary fame.'

'We discovered that the face of Jane Austen, which graces the £5 notes in our pockets and purses, is actually false.  Why?  I guess you'll just have to wait and see!'

'All the staff spoke about Austen in a lively manner which matched our enthusiasm, demonstrating how a love of literature can unite all, no matter our age.'

'It was interesting to hear of where the inspiration for her novels arose, as well as the journey of her novels from sheets of paper to publication.  Walking through the centre we took a trip back in time to the age of Austen, where we were able to truly immerse ourselves in 18th Century life, with fetching Regency costumes, and real quills.'

'The highlight must have been the fancy dress.  As much as I would love to be able to state the educational learning or architectural genius we found in Bath as the most memorable part of my trip, I'm afraid the privilege has to lie with seeing Hannah dressed up in full Regency style.  There is nothing quite like watching a hoard of occasionally sensible teenagers throw themselves at lace fans, dresses and top hats.' 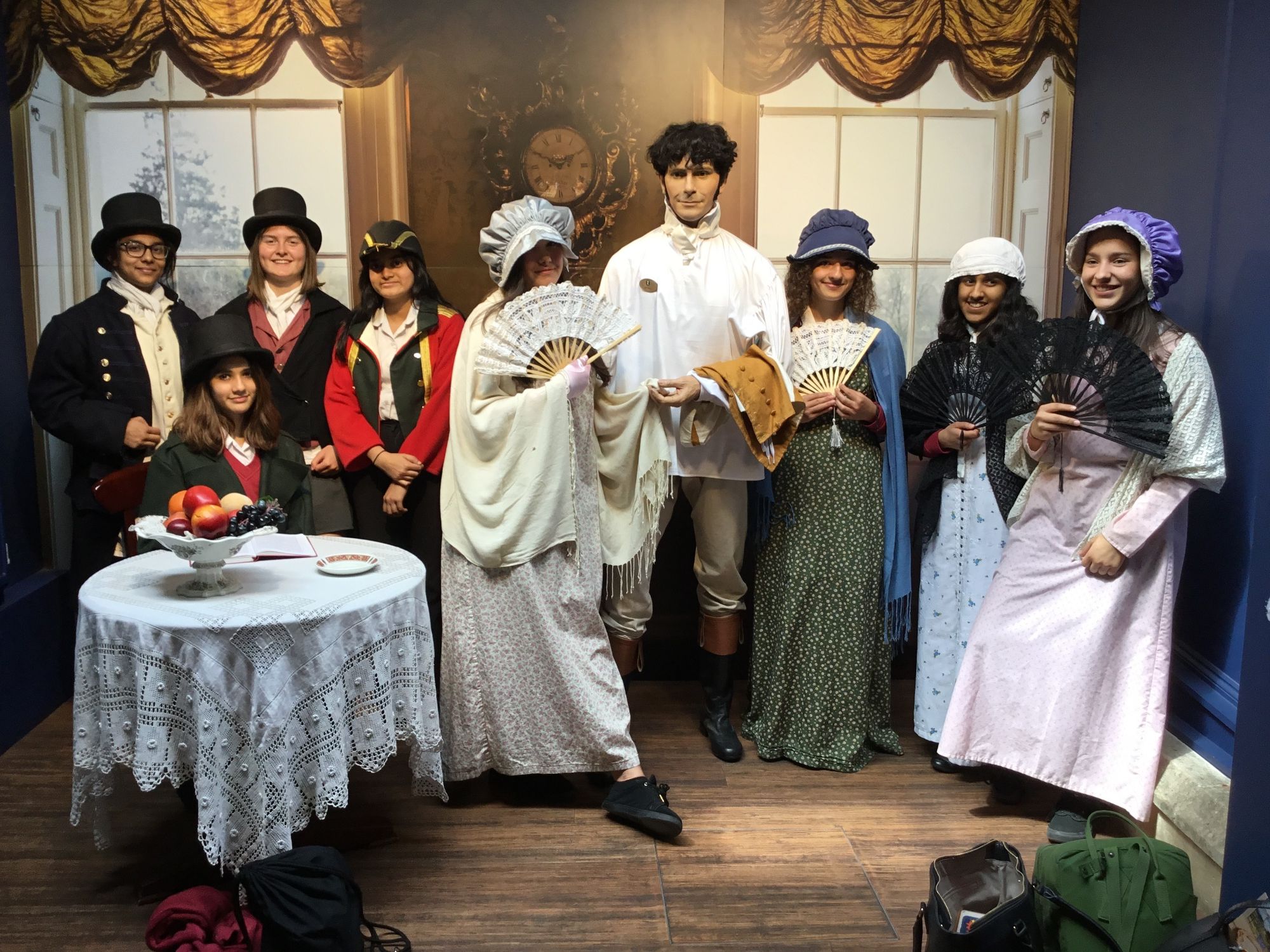 'It was a very pleasant day, spent in a magnificent city with beautiful weather.  We all felt like we gained a great deal of knowledge that will aid us in our analysis of Austen's 'Pride and Prejudice'.'

'We first visited the Bath at Work museum to learn more in depth context for the novel 'A Christmas Carol.'  The museum was once a family-run business, specialising in fizzy drinks and general engineering and repair work.  However, our main focus was the conditions under which the factory was run and the way the employees were treated, as these would give us more insight into the attitudes of employers (such as Scrooge and Fezziwig) at the time.'

'The Bath at Work Museum helped us to understand the context of 'A Christmas Carol' as it showed the dangerous conditions that those working in factories during the Victorian period would have no choice but to face.  This allowed us to comprehend Dickens' message of the plight of the poor that the more privileged members of society needed to address.'

'Throughout the tour we were able to see real, authentic equipment used for manufacturing both brass and lemonade.  It was however, alarming to see the lack of health and safety precautions; this helped to reiterate the extremely hazardous conditions that adults and children both had to endure.  It allowed us to sympathise with Dickensian characters such as Bob Cratchit in 'A Christmas Carol', as well as sympathising with the real citizens of Bath at the that time.'

'We learned that the daughter of the owner of the factory actually lost an eye when handling the glass bottles for lemonade and was lucky enough to get fitted for a glass eye, because the family was wealthy enough.  However, most working in the factory weren't as fortunate.'

'Another thing we learned about was the lack of restriction on child labour during the 19th Century.  Children were made to work from an incredibly young age due to their flexibility and small size.  They were made to crawl inside dangerous moving machinery, which cost limbs and lives.  This was very relevant to our understanding of 'A Christmas Carol' as Dickens was particularly concerned with the health, well-being and treatment of children.'

'I think the trip was very engaging and I will always cherish the memory of the tranquil scenery.  A piece of advice I would give to other students going on the trip is to take lots of photos and make thorough notes.'

'The Grand Bath was an inviting turquoise green ringed with ornate stone pillars.  Our raptures were, however, brought to a halt when we gingerly tasted the coppery mineral water of the hot spring, leaving us with a metallic taste.'

'Out of all the highlights, the most amusing was watching everyone react after drinking the water from the hot springs at the Roman Baths.  It seemed like almost everyone was disgusted by the taste and could hardly manage a sip.  Me?  I rather enjoyed it - it reminded me of tea!'