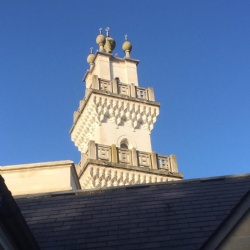 On Thursday morning, the two Religious Studies classes from Years 10 and 11 boarded the coach to go to Oxford. Our first destination was the Oxford Centre for Islamic Studies, a very large and architecturally beautiful building.

As we made our way into the foyer, we were greeted by a teacher, Caroline O'Connor who introduced us to the Centre. She explained what the Centre is used for and told us about the symbolism of different aspects of the building, from the tessellation of the bricks to the stunning fountain in the middle of the courtyard. Caroline pointed out that all of the rooms of the Centre were named after different parts of the world, signifying the international dimension of the Muslim community. We learnt that every mosque has a Minaret which announces the call to prayer five times a day, but this one was not active as there were also university students living on-site from all backgrounds, who would not appreciate being woken up in the early hours of the morning! 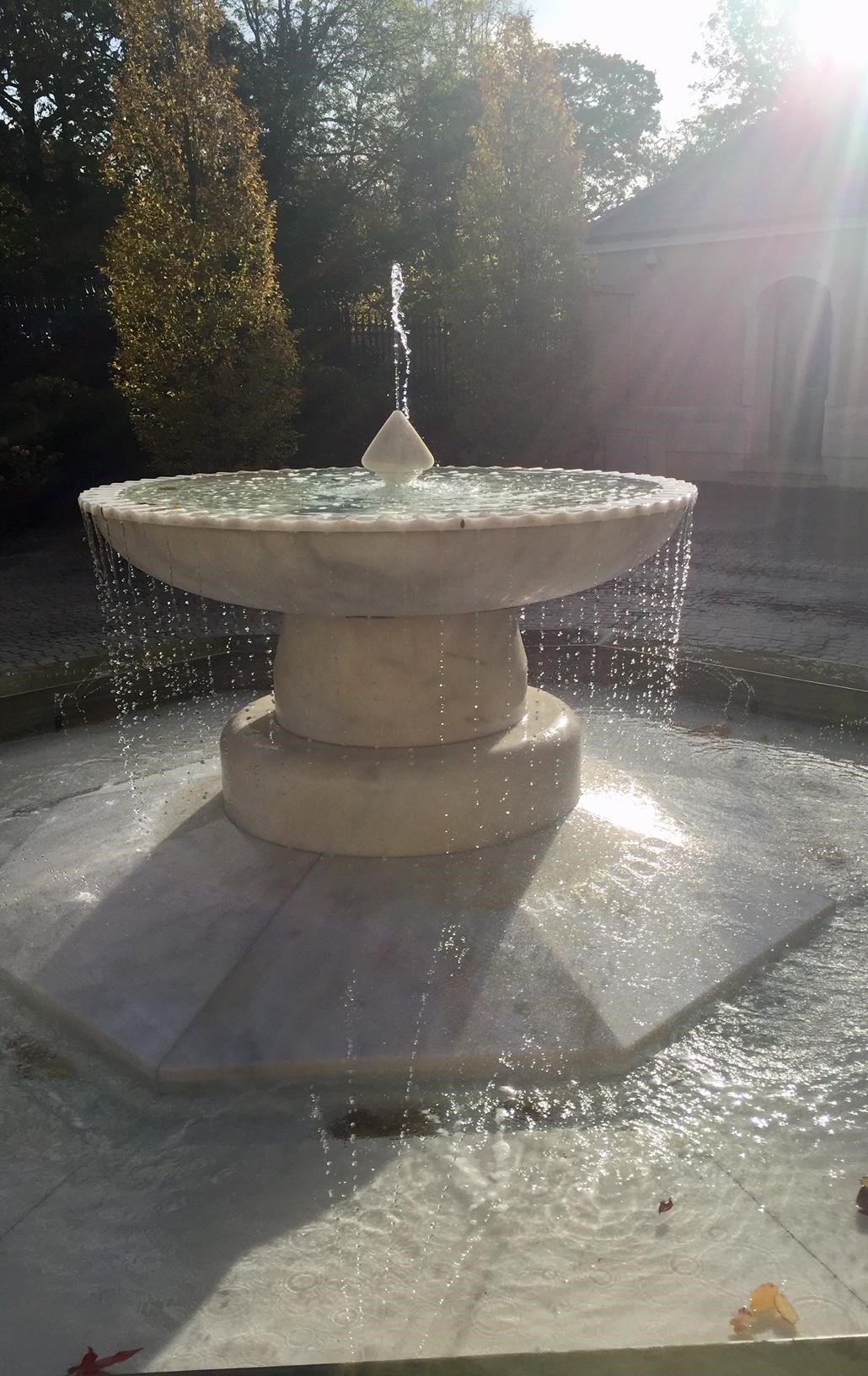 The inside of the Centre also houses two different cloths - one being the Kiswah from 2014 (the fabric that covers the Kaaba in Mecca that is changed yearly) and cloth from the Prophet Mohammed's tomb. Inscribed on the green silk with gold embroidery (in Arabic) was the 'testimony of faith' or 'Laa ilaaha illallaah'. She told us about how walking past that tapestry every day allows her to pause and have a reminder of her values in a hectic life.

Caroline explained to us that Muslims believe that Prophets were created by Allah - literally meaning 'The God' - as messengers of God. Interestingly, many of the identities of the Prophets overlap with prominent Christian and Jewish figures, such as Adam, Moses, Daniel, Abraham and Jesus. However, in Islam, these people are fully mortal and are not divine, just messengers of God.  Caroline also spoke about the divinity of the Arabic spoken in the Qur'an. It is not modern Arabic but beautifully constructed and mathematically complex in a way that suggests a divine creator, which we found really interesting.

Next, we visited the Christ Church Cathedral. After lunch, we met Jackie Holderness, 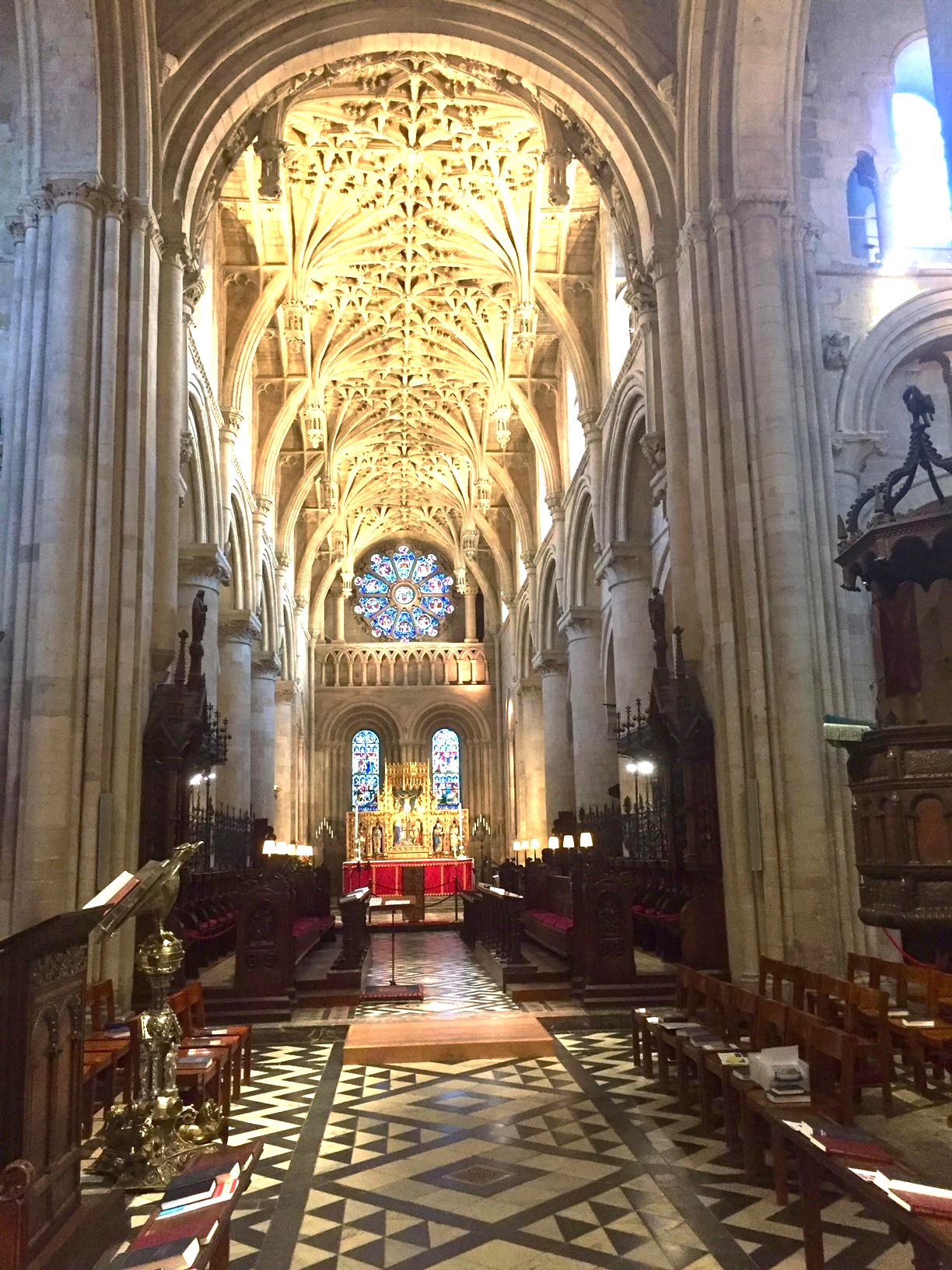 who gave us a short introduction, including some small facts she thought we might find interesting. For example, the girl who was the inspiration for the character 'Alice' from Lewis Caroll's 'Alice's Adventures in Wonderland' lived in the accommodation in the building, with Caroll being her Maths tutor. We then learnt a great deal about the history of the building and how attitudes to different denominations of Christianity changed due to social factors through the ages.

We were lead by a guide to whom we had the opportunity to ask questions about features of the Church. Our guide pointed out some windows had been initially smashed and put back together again during the Reformation, a time of religious unrest.  Some churches and cathedrals smashed their windows in advance and kept all the pieces safe, to be reassembled again once people became more accepting. 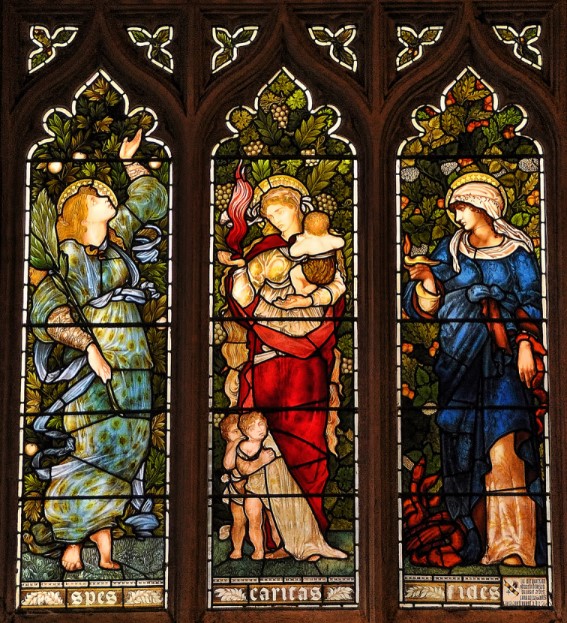 One of the particularly ornate windows were a set of three depictions the three martyred Saints of Faith, Hope and Love (also could be called charity- these words are very similar in Latin), words listed in Latin underneath each martyr. Our class admired the vivid colours and the intricate details of the stained glass windows and were told that followers of Christianity look to this window as a reminder of the three Christian values,with the most important value being love.  Additionally, a detail included in many of the memorials of Christian figures from history was the presence of a skull and crossbones. We learnt that this was to symbolise that the physical body stays dead and decays, therefore placing emphasis on life after the death of the soul.

One shrine that we found particularly interesting was that of St. Frideswide, a Saxon princess who became the patron saint of Oxford.  She  gained the reputation of a healer and a beloved figure. Once we had finished our tour, we had the opportunity to question Bishop Robin, the Catholic Canon who works with the University. He gave us a lot of insight, from everything from the role of the Church in the local community to his personal opinions on homosexuality and how it aligned with his religion's teachings.

We were all very fortunate to receive such a brilliant opportunity to see the impact first-hand that religious places of worship have on people. Through this trip, we were able to link our newfound knowledge about these places of worship and apply this to our GCSE course content more in-depth. We saw that religion could change people's lives by giving them satisfying answers to existential questions and constantly shaping themselves to be better people, a sentiment which we ourselves hope to carry forward.