While world leaders have been meeting in Madrid, Spain to discuss climate change and the urgent need for action, fifteen Year 12 Geography took part in a mock UN Climate Change Conference organised by InterClimate Network on the afternoon of Friday 6th December. The event took place in Reading’s Council Chamber.

Students from several local schools role-played the delegates at the real United Nations Climate Change Conference. The Kendrick teams were representing Bangladesh, Brazil and Japan. The Carbon Cycle and the Enhanced Greenhouse Effect leading to Global Warming and the current Climate Emergency is one of the eight topics studied by A Level Geography students. The event is therefore useful for their study but also shows the relevance of the subject to modern day global challenges. Prior to the event, students had spent time researching the progress made, and the challenges still faced, by their countries. This allowed them to argue effectively during the conference. As Key Stage 5 students, Kendrick students provided excellent role models for some of the other delegates. Everyone had so much to say that we could have spent all day reaching our conclusions instead of just the afternoon. The level of arguments and the points made by the students were extremely impressive, as was their clear understanding of the importance of these issues.

Half way through the afternoon, Mike Barry, who was Marks + Spencer’s Director of Sustainable Business, addressed the conference delegates, pointing out that they are likely to be the business leaders of the future and will be in a position to make a difference to the way businesses approach the Climate Emergency in the future.

Students then broke into small group and were able to meet people working on Reading’s 3rd Climate Change Strategy Consultation which is being carried out to enable a new strategy and action plan to be developed in response Reading Council declaring a Climate Emergency in February this year. The consultation welcomes input from anyone in the community. Students from all schools were encouraged to think about small changes they could make at home and at school: we hope to join with the eco committee to support them with some ideas to help them in the changes they are trying to make in school. 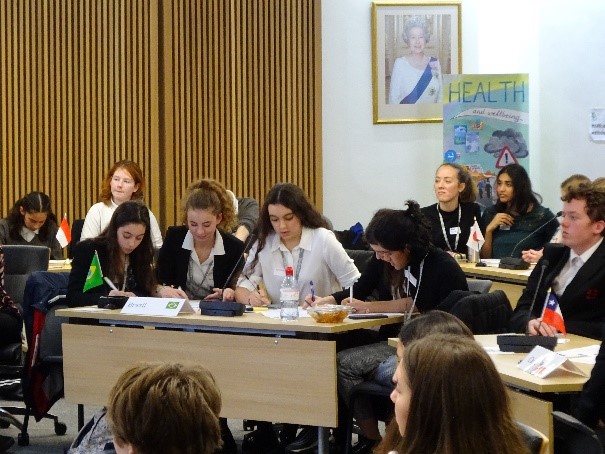 At the end of the afternoon, the organisers called upon the students to see if anyone would like to make some closing comments about the afternoon. Zainab confidently took that opportunity and this is what she said:

‘On behalf of everyone here, thank you for organising an event like this. Personally, I think that it is extremely important to know about what each country is doing to combat climate change, and to realise what we as individuals can do on a small scale. This climate change conference required a lot of research beforehand, which definitely helped me become more informed on world affairs surrounding Global Warming. I also learnt a lot during the conference, which instilled a newfound fear in me for our future. Everyone talks about Climate Change, but we do not understand the urgency of it until we see actual facts and figures. However, following the negotiation part of the conference, I also realised that there is hope for our world, and that the way to this is through collaboration. This is our world, after all, that is in danger, so we must all work together to save it.’

Thank you to all of the Year 12 Geographers who worked hard in their teams to prepare themselves.