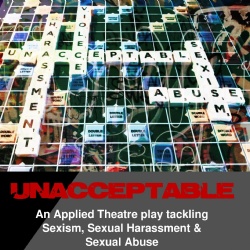 Last week, Year 10-13 spent their PSHCE lesson watching a drama performance called “Unacceptable” by the theatre company, AlterEgo. The performance highlighted issues of sexism, sexual harassment, and sexual violence, and particularly pushed the importance of reacting to casual sexism to prevent it progressing into a bigger issue. The show portrayed two students who stage an ‘intervention’ for their mutual friend over sexist comments he has made, and over the 40-minute show they educate him on what it means to be sexist. It isn’t just ‘hating women’, but a variety of different behaviour that the actors explain fall under three different categories: benevolent, hostile and ambivalent sexism.

A particularly memorable element of the piece was a series of sexual harassment scenarios put to the audience, which became progressively more serious. The purpose was to show that regardless of the severity, acts such as these should not be tolerated whatsoever. A thought-provoking metaphor they used throughout was comparing sexist comments to a house on fire. The assumption is that the most dangerous element of a house fire is the fire itself, but in reality it is the smoke. The actors compared the smoke to everyday sexist comments which are put out into the air unnoticed, contributing to overall sexist attitudes as more people breathe it in. The more smoke, the more accepted and tolerated sexism becomes in society, and the performance ended with an emphasis on preventing the smoke and calling out casual sexism.

The actors spent another 15 minutes after the performance discussing the topics they covered, and this was particularly helpful to the students as they had the opportunity to comment their own views, and learn about avenues of support if they experienced something similar. All the years that saw the performance unanimously expressed the view that the message was put across very well, and the performance was exceptionally engaging, even for a few who initially thought they might not enjoy it. Even Year 13 students admitted they had not known there were three different types of sexism, showing how educational it was regardless of age!

Whilst the scenes portrayed in the performance were not true stories, sexism is unfortunately still prevalent in our society, and many of the themes in the show are likely to be experienced millions of times across the globe. We would like to remind you that even casual sexism is completely unacceptable, and that there are many support services here at Kendrick. If you, or someone you know, have experienced sexist remarks, actions or otherwise, please talk to someone about it - your form tutor, teachers, peers and the Student Welfare team are all here to help you work through issues and take appropriate action.