On Sunday 26th September, it was European Language Day, which is celebrated in order to promote awareness of the importance of language in our community.  To commemorate this special event, the Goethe Institut in London had hosted a 'Languages for Wellness' competition.  Participants had to write a paragraph outlining how languages can have an impact on our wellbeing.  A week ago, I had received a letter from the Institution to say I had won the competition!  In the box, there was also some German goodies including a bullet journal, a PE bag, some earphones and more!
This was my entry for the Goethe Institute Competition for Languages and Wellbeing

Languages and Our Wellbeing

The aim of Modern Foreign Languages (MFL) in our curriculum is to educate children on the environment and dialects outside our country. This reason is disguising a true meaning that can be obtained by learning a language. The definition of “Language” states that it is a mere form of communication.

However, a language is not only a form of communication.It is a form of understanding and how we can apply our knowledge of a language socially and mentally as well.We can embrace different cultures and a feeling of realisation will overcome us, as we can find ways of how to make ourselves happy through the form of language.

Accents are an excellent example of showing your feelings to another person of that dialect, and they may not even realise it.  That is the speciality of language.

In my experience of my learning a language at school, it has been amazing to see the similarities as well as differences between English and other European languages, and it has been fun learning mnemonics and phrases which can express what we are. Languages and our Wellbeing have a strong bond, but it is up to us to recognise that link.

The picture below is a collage represent different cultures from Europe.These may seem unusual on first thought, but these new innovative ideas are something that we can learn from these cultures such as the Spaghetti Ice cream in Germany (This is particularly my favourite) and French Baguettes.  This is what Language has taught me so far. 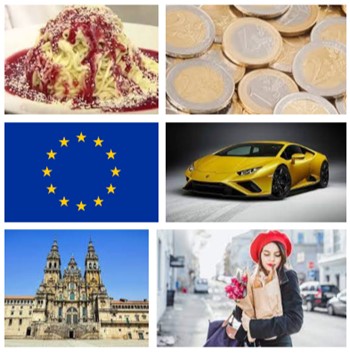