On Monday 14th March, Years 9, 10 and 11 had the amazing opportunity to watch a play performed in German. Being in Year 9, we thought the play would be difficult for us to understand: in fact it was quite the opposite! We were surprised by how much German we knew, and were left feeling optimistic about the possibility that we might be able to speak colloquially in German one day. We were told that the actors started by saying their lines slowly, but once they realised that their audience was able to understand what was going on, they spoke at the same pace as if speaking to a German audience! We have shared our understanding of the play with you in this article…

The play has three main sections, or if you will, important plot points. The story is about a girl, Mia, who has an obsessive belief in horoscopes. In the first section, she is relaxing in her garden on a sunny day in the countryside, when her neighbour's grandchild, Chris from Berlin arrives.  She immediately finds him annoying and assumes he is a burglar. After the misunderstanding is cleared up, Chris decides to annoy her in several ways which results in the fence between their gardens collapsing. In the second section, time rewinds to show an alternative reality where Mia has read her horoscope for the day. It tells her that love is on the horizon, and she interprets it that her love is the boy next door, Chris.  She constantly tries to flirt with him which gives the audience second-hand embarrassment and another broken fence. In the third concluding section, the other boy next door, Fred (who is secretly in love with Mia), tells her that she made a mistake and the horoscope she got was for tomorrow - Friday which is when his cousin just so happens to be coming. Mia hastily cancels the pre-planned date with Chris and repairs the broken fence. Later, Mia makes plans to go out with Fred and his cousin Peter. 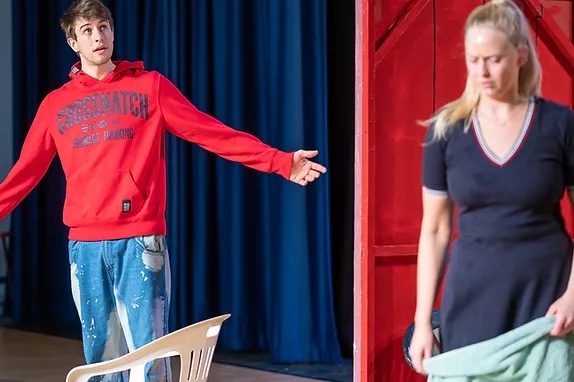 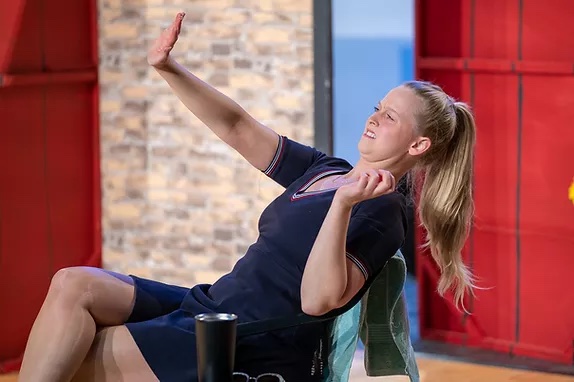 At the end of the play there was the opportunity to ask the actors questions (in German, of course!) where we found out their names: Jonna and Janna. It took us some time to realise that Jonna was playing two different characters!  We thought the play was very well-thought-out, in both the language chosen, and the physical actions used to accompany it. The dramatisation also helped as the characters were very expressive with their actions, making it clear what / who they were talking about, as well as utilising props such as balls, phones and suncream!

We thought the play (Theaterstück in German) was funny and made us realise that German is a fun language to speak in!  We would definitely want to watch another play (hopefully the sequel to this one!) as it really helped us with the development of our linguistic skills whilst also helping us to see how the language was spoken in an everyday manner.

We would like to say a huge thank you to the actors, Jonna and Janna!