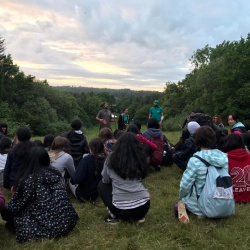 The Year 8s had a great trip to Bushcraft, learnt and mastered many skills including making a fire, working together as a team, making use of natural resources and much more!!

We hope that we get more opportunities like this in the future to spend some quality time away from our phones and enjoy the natural beauty of our world.

By Giselle, Ivy, Usmi and Saswathi

We arrived at school at 8:15, and got ready to get on the coach. The coach drive was about an hour long, filled with plenty of music and sing-alongs to Olivia Rodrigo.  At Bushcraft, we were split into two yurt groups, and were given some snacks. We were also given riddles to work out, which we struggled with around the fire.  We were then ready for our first workshop.

In this workshop, we learnt several methods to make a fire, including an electrical fire (by using steel wool and batteries), a fire lit using wood and a pair of flint and steel and a purplish fire, by reacting glycerol and potassium permanganate on top of cotton balls. After this, we were split into tribes, and had to use our new-found fire building skills (and help from our Tribe leader) to make a fire, and cook our own burgers for our lunch. We learnt about the different sizes of wood to use and what order to place them in to build up our fire. There were 4 different types of wood ranging from matchsticks (very thin sticks) to wrist sticks (sticks the size of your wrist). We collected a good amount of each stick, and built our fire in a triangular shape, starting with the smaller sticks, and building on the larger ones. The only real struggle of building the fire was actually getting our flint and steel to light. After several tries from multiple different people, our Tribe Leader ended up having to light our fire, which proved to be much easier. Once the fire was lit, we were given a grill, and we set our burger patties (either veggie or beef) to cook. Soon after, lunch was ready, and we ate our delicious burgers with chips and vegetables.

After lunch, we were assigned our tent groups, had some time to relax in our tents, and unpack.  We then enjoyed games around the campfire, and some more riddles. A little later, we went for a walk, and played some more fun games outside, (and got to roll down a very big hill). Soon enough, it was dinner time, and we enjoyed some delicious pasta around the campfire. After washing up, we roasted marshmallows and had s’mores (which were delicious). We were told to keep our marshmallow sticks - which I was quite confused by - until one of the Tribe Leaders told us what we were doing with them.

We ended the night by imagining a goal or a wish, and throwing our sticks into the fire one by one whilst imagining achieving our goal/our wish coming true. We all left the yurt in silence, and got ready for bed.

The day started with the tribe leaders’ jaunty rendition of “The Lion Sleeps Tonight” from the Lion King, a tune we were very much accustomed to at this point. After about twenty minutes or so to get ready for the day, we were called into the yurts for breakfast. The meal ended with a hearty sing-along led by one of the Tribe Leaders.

Our morning activities were on a rotating schedule of archery, axe-throwing and bracelet making. Multiple people in my tribe had a particular knack for getting a bullseye three times in a row, regardless of whether it was an arrow or an axe. However, I was not one of them, and instead found myself to be much more qualified at bracelet making than any of the former.

By twelve, we were famished, and pleased to be greeted by our amazing chef with warm vegetable curry and a delicious slice of flatbread. The campfire was a cosy place to huddle around after our chilly morning spent out in the open, and after a couple more bouncy melodies, I was definitely in the mood for some more adventuring. Next on the agenda was some wilderness cooking, where we would go back out into the forest to create a fire and cook our own dinner over it. We ended up making a lamb stew, abundant in root vegetables, meat and olive oil.

Waiting for the lamb to cook, our Tribe Leader took us on a wilderness walk, a real one this time, and we learned many facts about the surrounding vegetation. We learnt about the hazel tree that we used to carve tent pegs for our shelters. We saw a thousand-year-old tree that had been struck by lightning hundreds of years ago. We even learnt how to hold a stinging nettle without getting stung and which reed seeds to eat and which to jump over. Finally, mealtime came around, and our stew was ready to enjoy!

This day was going to be the last full day at Bushcraft, so we had to make the most of it. After breakfast, for our first activity, we learnt how to use our natural surroundings to conceal ourselves in the woods. This included putting on green and brown camouflage makeup and playing a few games.

After that we started our First Aid training, where we learnt the step-by-step process of helping a person who is in medical danger including Dr ABS.  Then, we prepared ourselves to go for a walk through the “Nuke” Land which was a model of how our planet would be if we did not take care of it. Little did we know of what was going to happen next. We saw a huge plane crash with several casualties! This put our first aid skills to the test. We took care of the casualties and at last we had saved all of them!

We than had a delicious lunch and were excited about our next task. We went on a wilderness trail, learning about different plants along the way as well. After a tiring walk, we started cooking stew for dinner which meant we had to chop all the vegetables including potatoes, carrots and celery.  We also practised our Tribe’s Got Talent performances before the big show!

After dinner, we all sat on the hill ready to see the TGT!  Everybody enjoyed the show, and we went back to our campsite. As a nighttime snack, we had hot chocolate and apple crumble which was amazing! We heard stories from our camp leaders around the campfire until it was time to go back to our tents.

On this day, we had to wake up early in the morning, so we could pack in time to leave later in the day. Before breakfast, we packed our bags, and then sat by the campfire and had a riff-off.  We were split into two groups, and then given a word. We had to think of songs with that word in them, while taking turns with the other group singing a different riff each time. Once a group ran out of songs, the other side got a point. While we played this game, different tribes were called to have breakfast.

After breakfast, we did our last activity at Bushcraft. We learnt all about the different types of traps, and some of their names were ‘strangle’ traps, ‘mangle’ traps, ‘dangle traps’ or ‘tangle’ traps. I thought these were pretty funny, but the fact that they all rhymed was useful because it made them easier to remember. The traps and how they were used and built were demonstrated to us, then we had to go into our tribes, and try to make a trap using the techniques we had been shown.  After some time to make our own trap, we went around and looked at each group’s trap.

We all then went out to where the shelters we had previously made were (some students had even taken the challenge to sleep outside the previous night!!!), and we were given some things to camouflage ourselves with, then we played some games, where you had to sneak as close to a certain person as you could in order to win the game.  After this, we got into our Tribes again, to do one of the last activities, which was actually cleaning up, but the instructors turned it into an activity.

For the first of three activities to do with cleaning, we had to disassemble the shelters we had made throughout the trip and bring all the stuff back in a neat pile. My tribe won this activity, and as a reward, we got two bags of marshmallows to share between us. Next, we had to disassemble the shelters that the other tribes had made that morning, similar to the first task. This time, the group that came second in the first task won. For the third and final task, we had to collect the most rubbish from around the campsite. We did all sorts of strange things in an effort to win this task, such as going into the teacher's area - that we had been allowed into of course- and asking teachers if they had any rubbish in their pockets. We also asked a few people from the other yurt if they had any rubbish. This time though, the group that had not won yet won, meaning that each of the tribes from our yurt won once.

Finally, we had lunch, which was a falafel and couscous wrap, that was really nice. Once we all had lunch, we had to line up in our forms again. We boarded the bus but there wasn't much singing this time, as we were all really tried and quite a few of us even fell asleep. On the last leg of our coach journey, we sang songs like ‘Call me maybe’ and ‘What makes you beautiful’. We then exited the coach and collected our belongings from the front lawn, where we waited until we were collected by our parents.

Click here for photos of the fun we had.