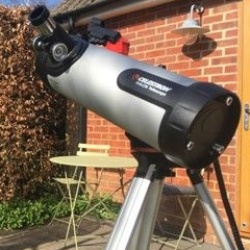 Our Year 13 students, Jade and Katerina have been running ‘Space Society’ for the last few years.  Throughout lockdown they used the two computerised Celestron telescopes belonging to the Physics department.

These are loaned to interested students, and you will see from their blog how much Jade and Katerina have been inspired by being able to use them. 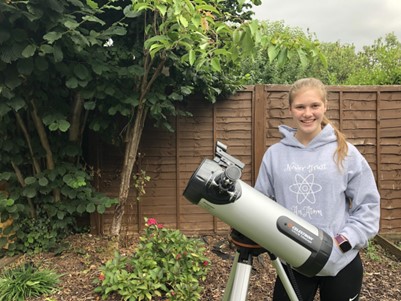 March 2020- a month cemented in the world's mind as the month everyone went into lockdown for the first time. The lockdowns were a difficult time for many, and we all had to find new ways to pass the time and cope with this newfound isolation. Like many, I used this time to take up a new hobby: amateur astronomy & astrophotography- thanks to the Physics department letting me borrow their Celestron 114 LCM telescope.

At first, I began to use the telescope not during the night, but during the day, making use of the ability to align the finderscope and main mirrors with distant objects I could clearly see (i.e. my neighbour's chimney), but soon progressed to viewing the moon. 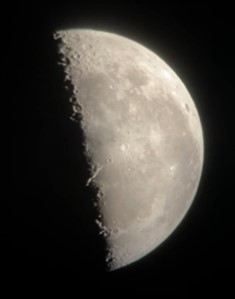 a phone camera up to a lens is not as simple as it initially seems, and my first photos weren’t as successful as I’d hoped. However, I persevered, eventually getting the knack of both the photography and editing process, resulting in much improvement to my photos!

(pro-tip: if you don’t have a mount for your phone and are struggling to hold it still enough to take an in-focus photo, switch to a video, and pick the best frames afterwards!) 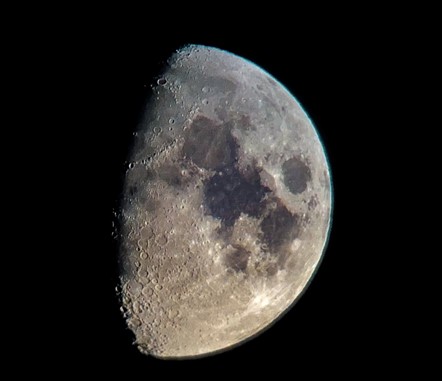 As summer arrived, so did the giant planets in the evening sky, and I ventured into local fields and my garden to photograph Jupiter and Saturn. Although it’s awesome to see Saturn’s Rings, my favourite thing was observing the dance of the 4 largest moons of Jupiter, appearing to change positions day by day as they orbit the gas giant. 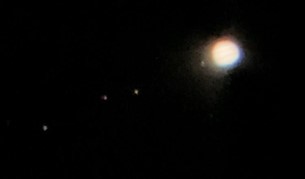 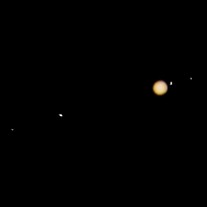 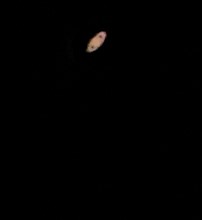 At the same time as exploring the skies with the telescope, I was also learning to use our DSLR camera for astrophotography, mainly taking long exposures of the sky to capture light from the faint stars invisible to the eye. I then combined the two, attaching my camera to the telescope, which opened a new world of challenges and interesting observations, such as of Comet Neowise, visible as a faint white streak to the eye or camera, but down the telescope, it’s green colour could be discerned. 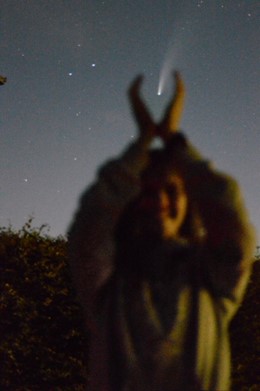 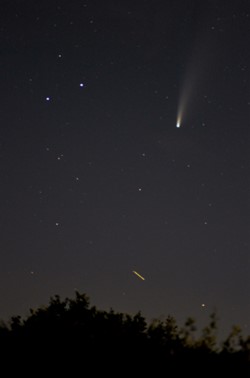 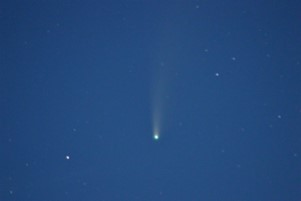 As 2020 drew to a close and the pandemic was once again resulting in lockdown, I found myself rushing home from the bus stop to spend my evenings with the telescope pointed out of an upstairs window, tracking Jupiter and Saturn as they grew ever nearer during the Great Conjunction. This event marked the closest the 2 planets had appeared to for over 400 years, and it was amazing to be able to see both these planets within one frame of the highest power lens on the telescope! 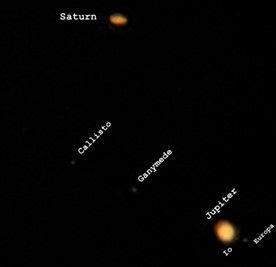 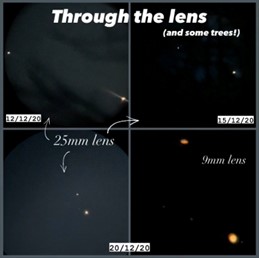 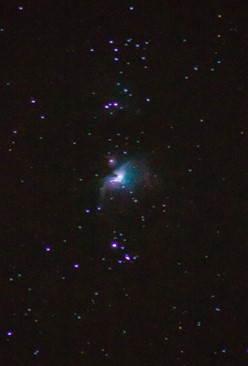 I continued using the telescope throughout the 2021 lockdown, setting new challenges for myself such as observing the Orion Nebula! It was so rewarding not only being able to see the faint smudge of the nebula down the lens, but also bring out some of its colours by taking a photo! 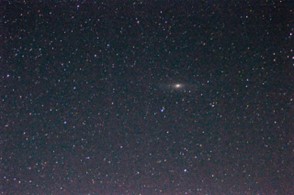 observing Mizar & Alcor (the “double star” in the big dipper), the beehive cluster (M44), the Hyades, the Pleiades, Andromeda (the nearest galaxy to ours!), Mars, and Venus!

Although I have had less time during year 13, I have loved being able to get out the telescope and learn about the night sky, seeing how it changes night by night (the moon will NEVER get old, I love seeing all the craters and how they are lit differently over the month!). I am incredibly grateful for this opportunity to use the telescope, and I’m excited to pass it on to another budding astronomer!

Jade, of Never Trust An Atom Blog (you can find my photos @spacebeyondtheaperture)

Through the lens with Katerina 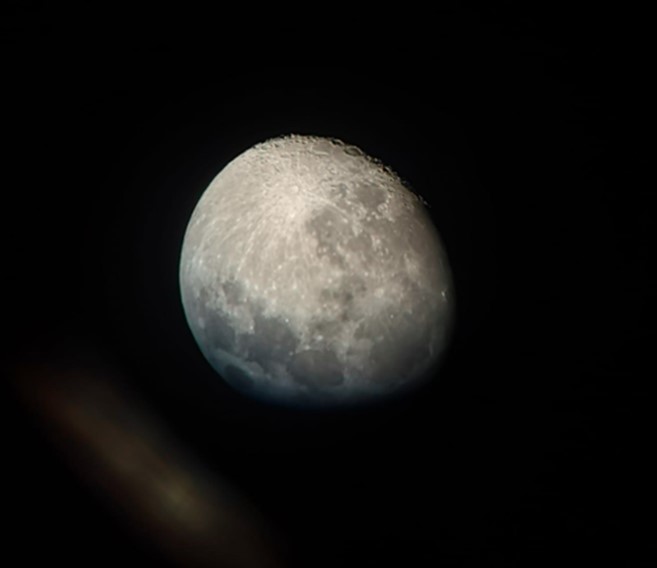 I was interested in all that was visible in the night sky, often travelling to less light polluted places to see the many stars visible to the naked eye, to see the Milky Way stretch across the sky and to watch shooting stars during meteor season. Borrowing the Celestron 114 LCM allowed me to further explore our night sky. I started with an easy target, using the telescope to view the moon to amazing detail. I was particularly interested in the 3D landscape visible with the 9mm lens, allowing me to view the mountains and craters at the edge of what was visible of the moon. 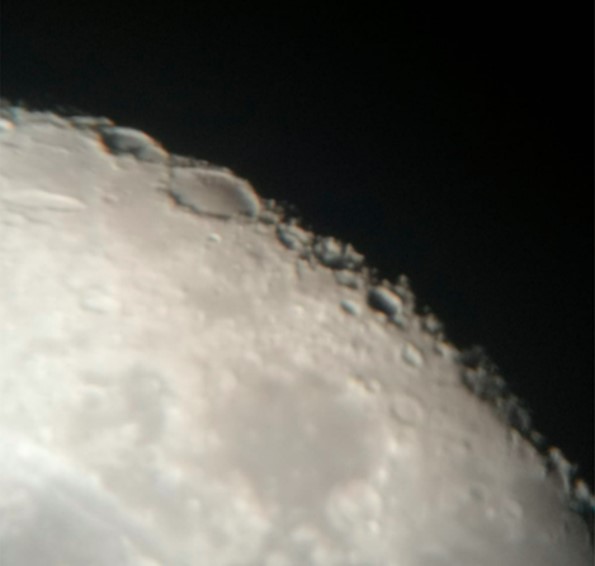 I was able to take photographs of the moon and, although I didn’t know how to edit them, they show the amazing detail of the 25mm lens.  By using a phone to zoom in and take more pictures, I was really able to explore the complex structure of the moon’s surface with the 9mm lens.

Although I did not photograph them, I used the telescope to explore both deeper space, viewing the andromeda galaxy and the double star in the big dipper, and closer to home, viewing the planets Jupiter and Saturn regularly. The feeling of being able to see a seemingly ordinary star and say “that is in fact a galaxy” was amazing.

Recently, I waited until 3am to view the alignment of the planets with the moon, allowing Mercury, Venus, Mars, Jupiter and Saturn to be visible at the same time. To be able to view all these planets in the same evening was breathtaking. To see Jupiter’s moons and, with a little focusing, being able to make out its stripes. To see Saturn’s rings. To see Mars’s colour and Venus’s brightness. And to see Mercury at all, when it is usually too close to the sun to be viewed safely. It was an amazing experience, to see these objects and know I was viewing an entirely different planet.

Using the Celestron telescope has allowed me to deepen my interest in our night sky, and space as a whole.