On Tuesday 12th July, ten members of the Kendrick Student Leaders (KSL) team attended a 'UK Student Leadership Conference 2022' in London hosted by the FCA.  This was a programme aimed at state school girls, where we learnt not just about empowering ourselves but also our peers, the young people around us and our community. We attended a variety of different seminars ranging from identifying unconscious bias in both the school environment and the workplace, learning how to inspire social change around us by becoming agents of change and gender-based safety in school. We hope to impart the valuable lessons we have learnt from this conference in our school. 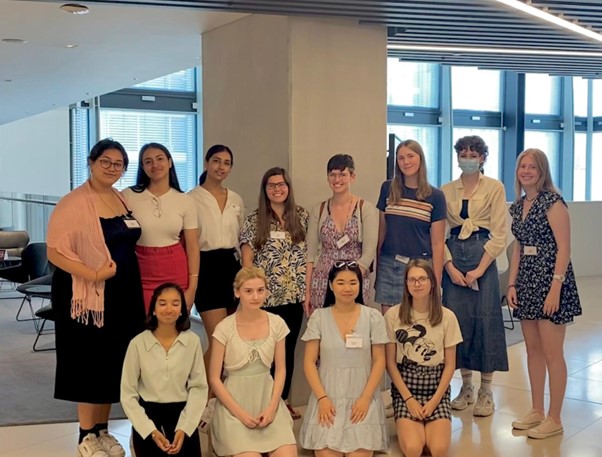 Gender Based Safety in Schools

One session we attended was focussed around sexual harassment in schools and the sexualisation of girls. Led by Sarah Morgan, the Headteacher of Eastlea Community School, we were urged to consider the impact such issues had on young women's mental health and to reconsider our approach on talking about ourselves and those around us. One such exercise prompted us to think about how much we 'weigh' in terms of our achievements, rather than in kilograms and stone. Hearing responses like 'I weigh… I am a great listener, I am a student leader, I run a dance club for younger students." allowed us to see first hand how the objectification of women and girls can be tackled and was a simple but empowering way to spread positivity that we think could be implemented in our own school.

Led by Dominique Ramsay-Gentles and Sonalee Sarkar (two key members of the team at Education4Change), another session we attended was about the unconscious bias that we all have. It focussed on racial stereotypes that have been conditioned in us societally. We had the opportunity to watch a video showing a social experiment which was conducted as a replica of one which was done in the 1940s, asking black children to answer a series of questions about two dolls placed in front of them, one black and one white. The children would respond to questions such as “which doll is pretty?” and “which doll is good?” by pointing at the white doll which was upsetting to see. This, in addition to other real-life examples we were shown, opened our eyes to the bias we have about people based on qualities they cannot change, even if we are not doing it on purpose. We need to be aware of our unconscious biases in order to prevent unfair stereotyping and discrimination and stand up for the people who have been the subject of such behaviour.

This session, led by Cambridge undergraduate Hannah Dale, was an eye-opening discussion focussed on issues relating to discrimination based on race, sexual orientation, gender or religion. We discussed the underrepresentation of ‘minority’ cultures in institutions such as the media and the education system, and whether enough was being done to solve the problems of injustice and inequality in today’s society. It was inspiring to hear the views of the other students attending the conference, and it highlighted the significance of ensuring that our growing awareness of social issues is acted upon, rather than the problems remaining accepted and normalised.

There were also workshops on Empowering young people to be active agents of change and Political change through Local Government.

A quote from James Baldwin shared by the speakers was particularly impactful in summarising the conference, “Not everything that is faced can be changed, but nothing can be changed until it is faced”. A key aim of the conference was to make sure that our generation of strong and independent women act as the catalysts for change we want to see which is what the leadership team aspires to take forward in all our future endeavours.

Another key message that we took away from this experience is that, in order for social change to occur, we need to have the courage to talk about topics that may be uncomfortable or ‘taboo’ and acknowledge the injustices that are present in society. A particular quote from Llando du Plooy’s talk that stood out to us was “You can stay where you are loved, or you can go where you are needed.” We think that this really sums up the message of this conference, as we can all do our part to tackle social issues, even if we need to step outside our comfort zones to take action against injustice.

We would like to thank Frau Müller and Miss Callcut for accompanying us on this trip, and for planning and navigating the journey to and from London. We are also very grateful to the speakers we heard from and to FCA for hosting the event. The conference was a truly insightful and valuable experience that will help guide us in the future.