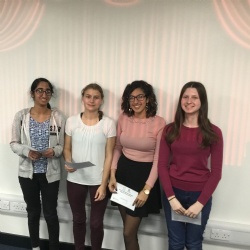 On Wednesday 14th November, we had the wonderful opportunity of going to Imperial College London in order to compete in the UKMT senior team maths challenge.

Once we had arrived at the University, which was a stunning location for the competition, we began warming up for the puzzling questions which we would face. The competition was structured in rounds with the first round being the group round in which the whole team could work together on, followed by the cross number, where we were separated into pairs to work on solving and the final round being a shuttle round consisting of 4 sub-rounds each of which we were given only 8 minutes to answer. We successfully managed to score 100% and even gain bonus points on 3 of the 4 sub rounds and performed exceptionally well in the other aspects of the competition too! In the end we achieved 2nd place, which we were all very pleased with.