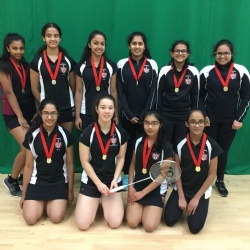 Last week the Kendrick School Badminton teams journeyed to Bohunt School to play in the County round of the National School’s Badminton League. This is the report of the Junior Team’s day.

We arrived as the first school and had a good warm up. As the other schools arrived our determination to win escalated.  First Downe House walked in and then St Crispins, all raring to go.

Our first opponents were Downe House but this year the system was different. As there were only 3 schools in total, all the games were played to 31. As Aneka and Anuva were players 1 and 2 they were our singles players. After anxiously watching Downe House and St Crispins battle it out, they finally started off the day for us. Both of our brilliant players got off to flying starts but that doesn't mean we saw that shuttle in the air for very long! On both courts for nearly every shot the shuttle went straight down on the opponents’ side. Aneka and Anuva marched off with confidence with scores of 31-2 and 31-5 respectively.

Next up were our doubles games. The first of this set was Rowena and Harshini. This match was just set up for a win and after some intense knocking up our players 4 and 3 were ready to bring home another 31. And that’s exactly what they did! From ultra-tight serves to soaring clears they did an excellent job and drilled bottled fear into their opponents. Yet another win came rolling in as Rowena and Harshini came off court with a brilliant score of 31-5. After this Aneka and Anuva were back on court with Harshini and Rowena respectively. Downe House pulled nothing new out of the hat and both pairs had nothing to fear. As expected two more 31s went in the Kendrick bag and we all took a short, well deserved break.

St Crispins were our second and last opponents. Rowena swapped out and Anya came in ready to roll. St Crispins were slightly stronger than Downe House as they had been playing for most of the day. Similar to before, Anuva went on as our first singles player but Harshini and Anya simultaneously began the doubles. Both courts were radiating victory as shot after shot and serve after serve came flying from our sides.  The singles match was a 31-11 and the doubles was a 31-7. Next, Aneka went up to play her singles. 31-13 was her winning score and she went in for her doubles next. She played with Harshini and they came in with yet another win of 31-1. This marked the end of the Junior Team’s day and we all settled down for some celebratory snacks and proceeded to watch the Senior Team...

The KS4 badminton team were first up against St Crispins, then Downe House and lastly Edgebarrow. The day was really fun and the matches were a good experience for the upcoming rounds. The team was very hard working and we all had a great time together. We were pleased with our performance and supported each other throughout the day. We won every match convincingly and finished as winners.

The next round for both teams is the South Regional round, in Guildford, in March.