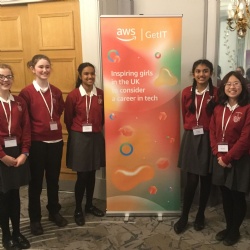 Below are two reports from students in Year 8 on the Women in Tech afternoon tea they attended at The Grosvenor Hotel in London.

This trip was one of the best experiences I have ever had to shorten what I am going to say. I had never known that there are different fields that include technology. For example have you ever known that security defences also used technology along with keeping banks safe from cyber attacks and spies? Amazing right? There are many various ideas and jobs that include technology from designing to coding. You may not like coding and sitting at computer desk, staring at the screen and thinking what on earth am I doing here? But once you have clicked the lightbulb in your head, then your expression is expressionless.

Many women that my friends and I met didn’t even have computing as a subject in school or hated it because of their teacher – not mentioning Mr Hayes, he is amazing. But when they realised there was much more in tech they never regretted their step towards their job. One woman held a session that tried to inspire many other girls. She said that some girls were suffering from a lack of confidence because of male dominance over a company. The key part of having a company is diversity in their clients. And all companies want people who think outside the box and say ‘what if…’ and try to look in a different perspective. This diversity is called neuro diversity or mirror diversity. And even if you have already took a different subject or thinking of a different subject, it is all right. Because many women that we have met took different paths for instance Phycology because they were interested but were shocked when they found jobs boring and rather not what they expected. One woman said that “You can take a 1 path and it will lead you in different ways.”

The best option is for you to take something you are passionate about but sometimes they may not be what you expect so be prepared and let time take you one. You may have heard of this said before a million times but here it is again – it is okay to make mistakes as long as you are correcting them, showing hard work, and understanding what you did wrong. When you are trying to do something, think, what am I doing and is there any improvement. The best way to put something out in the world is to know your story. And remember every single person is making an impact and influencing their community.

On Wednesday I went to have afternoon tea at The Grosvenor Hotel, along with five other people from my form who are all in the AWS competition. We were asked to write an email to you, talking about something either from or about the day. At first I thought that I might write about the food, which was very nice, but I thought to do it about the three main points I took away from the ladies I talked to. These were:

1. How quickly the technology industry is moving, and how there is always a gap for something new.

2. The diversity in the jobs, for example we talked to a lady who works with the Bank of England to catch spies, to another lady who works for Debenhams on the financial side.

3. The fact that you don't have to be amazing at coding, but if you have the determination then you will go far and do what you want.

I found this trip very inspiring, not just because we met with many different businesses, but also because we met with women who were nominated for awards such as Women of the Year. The fact that they all came from such different backgrounds, and all managed to get so far in tech, is also very inspiring because it shows that you can do anything with the drive, no matter who you are.