A Resident of Kendrick 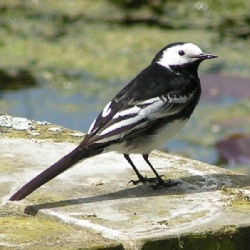 Many students in Kendrick are familiar with a small black and white bird who hops about in the car park during quiet moments.  They were challenged to identify this bird, and the challenge was won by Attsaya in 13SJ.

She correctly identified it as a pied wagtail (Motacilla Alba).  She also provided the following commentary: ‘I've actually seen this bird in our car park so many times across my years at Kendrick. Usually before the rush of school has begun or after it has passed I'll see it hop along from one side of the car park to the other. If I get too close it'll flit up to the wire fence and look over the tennis courts or run and hide behind one of the cars. Occasionally I'll see two of them run together over the tarmac perfectly synchronised.’   Well done to Attsaya for her observational skills.