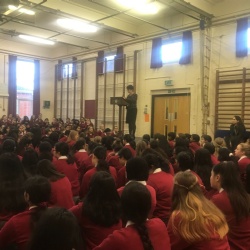 We, the students, staff and friends of Kendrick School, pledge to uphold the values of friendship, kindness and respect. We promise to stand against prejudice, ignorance and injustice in all its forms, promoting the values of equality, tolerance and justice for all.

This first assembly of 2020 coincided with an occasion that we always mark at this time of the year and that is Holocaust Memorial Day which is 27th January 2020.

This date in January marks the time  when in 1945 the concentration camp in Auschwitz was liberated by the allies and since 2001, this date has become the day when we remember the millions of Jews who died in those camps, as well as people who died in the many other genocides that have taken place since then, in Cambodia, Rwanda, Bosnia, and Darfur.

This year is a particularly significant year as it is also the 75th anniversary of the liberation of the Auschwitz Birkeneu camp in Poland and I am sure you will have heard news items over the last week describing and explaining the commemoration events that are taking place in parts of the world. Later today an event is taking place in Auschwitz attended by world leaders and Holocaust Survivors, women and men who are now in their nineties.

In this school, we mark this day in this assembly. Our Librarians have done some super displays to mark Holocaust Memorial Day in the Library and in the Vestibule and this year we are featuring the flame with some work done by our Year 9 with Miss Long, which is the symbol of this occasion and of the Trust. Also our two Holocaust Student Ambassadors, Charlotte and Krisi will be speaking to you shortly and again we are organising a visit of another survivor of the Holocaust, Lesley Urbach Wednesday 26th February here at Kendrick. 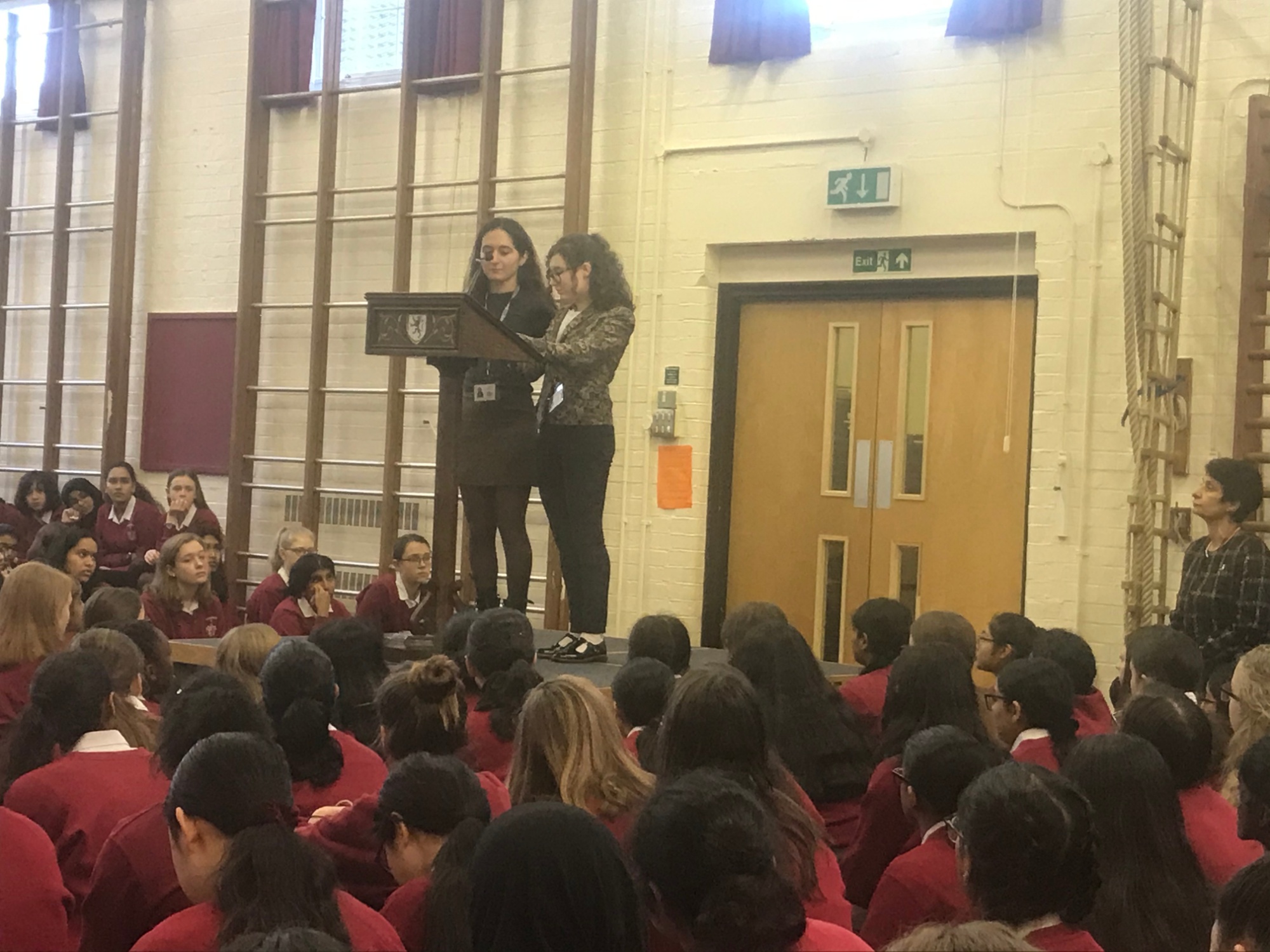 Every year, we send two A Level history students on a specially organised trip to the concentration camps of Auschwitz and Birkenau in Poland. Usually accompanied by a teacher, these students are given a very carefully organised tour of the camps and the history and then on their return to their schools they are tasked with giving ‘Lessons from Auschwitz’ to their community. Our Ambassadors this year, as I have said, are Charlotte and Krisi who went to Auschwitz last February year with Miss Heath. Their talk is below.

We’ve all heard the word. We all know that 6 million Jews - 11 million people including homosexuals, the Slavic people, Communists, intellectuals and more - lost their lives as a result of it. Remembering statistics such as these, however, changes nothing, when we focus on memorising faceless and incomprehensible numbers; the message of ‘never again’ - a phrase that has come to describe the transgression of the Holocaust - is lost. All those people - their hopes and dreams - become swept up in the other countless numbers that saturate daily life. They become just isolated past events; distant, as the world swears that it remembers but continues to allow hatred and prejudice to foster.

When we visited Auschwitz-Birkenau, we could see that the perpetrators of the Holocaust aimed to dehumanise the people that they sent there. Transported in cattle trucks, shaved, tagged; it was a manifestation of Nazi rhetoric that treated Jews as ‘rats’, as subhuman. To overcome the legacy of hatred left by the Nazis, then, we need to do exactly the opposite of this. Early on we knew that we wanted our part in the Lessons from Auschwitz project to be to restore the humanity of the victims, and the great human virtues - which can shine through, even in times as desperate as these - that they showed. Because it is dehumanisation that opens the door for cruelty and genocide. We saw it in the Holocaust. We saw it in the Rwandan genocide, when Tutsis were compared to ‘cockroaches’. We saw it in the Bosnian genocide, which is this year marking the 25th anniversary since its end in 1995.

Hatred prevails when we are successfully divided and pitted against each other, when we are separated into camps of ‘us’ and ‘them’. Our own current divisive political climate, with its referendums and its yes and nos, confirms this. Anti-semitism continues to infiltrate the highest levels of politics and feature in headlines. Social media gives hatred air time. In November, an 89-year-old Auschwitz survivor was put under police protection after receiving over 200 threats per day. Can you imagine being an 89 year old who survived Auschwitz and seeing that the same prejudice that led to a genocide is still present in society? Yet this can be overcome. This project is named ‘Lessons from Auschwitz’ for a reason - the people who suffered taught us something - a timeless lesson of solidarity and hope. Their lives and experiences are not limited and do not amount to being the nameless victims of a tyrannical regime. Their immense suffering is not their only legacy. This year’s theme, chosen by the Holocaust Memorial Day Trust, is ‘Standing Together’. Not only because by standing together, we can defeat hatred; but because that’s exactly what they did, even as it was attempted to reduce them to wild and lawless animals. Ironically, industrialised slaughter is unparalleled amongst animals. Focus on the ‘productivity’ and ‘efficiency’ of the camps saw the prisoners become resources in a capitalised genocidal market. Companies such as Siemens - which is still in operation today - exploited the opportunity of free slave labour as the Holocaust became a business.

The story that best illustrates this is one that we were told at Birkenau. It is as awe-inspiring as it was improbable: against all conceivable odds, a group of prisoners were able to blow up Crematorium IV at Auschwitz-Birkenau. On the 7th October 1944, after learning that the SS was soon to liquidate much of the Sonderkommando (the prisoners assigned to run the camp’s crematoria), the camp’s resistance movement was able to completely destroy one of the crematoria after months of smuggling small amounts of gunpowder from a munitions factory within the complex. It is a testament to their sheer determination to live, and the hope they reserved for the future, that under the surveillance of the Nazi guards, they were able to damage the camp in such an impactful way.

To hope is to be human: and nowhere is hope more remarkable than in places where it logically should not be, such as Birkenau, in camps designed to eradicate it; conversely, nowhere is the inhumanity of the perpetrators of the Holocaust more shocking than in places where they manipulated hope, with lies such as ‘Arbeit macht frei’ - work sets you free. Birkenau is a completely open space, bleak and endless with its rows upon rows of barracks - there is nowhere to hide. This vulnerability gives rise to a sense of inevitability of death which is almost overpowering. And all this, we saw without the added psychological trauma of the cruelty of the prison guards, and of watching, powerless, everyday as people you knew were taken, and you knew that you would never see them again. A Holocaust survivor who was aged 16 at the time of his incarceration in Auschwitz recently gave an interview in which he described arriving at the camp with his parents. They were separated on arrival. As he was directed towards the barracks of the camp, he asked the other prisoners where his parents were. In response, they pointed to the black smoke that was coming out of a nearby chimney. “There are your parents”, they said. He brushed it off as a sick joke. To an extent, he was right; the atmosphere of the camp was nothing other than nauseating.

The strength and bravery compounded in these acts of solidarity in an environment such as this is a lesson, which had a profound effect on us both. History has proven time and time again, that it is the lack of understanding between individuals that fractures societies and provides the opportunity for divisions to rise to prominence thus resulting in identity-based marginalisation of groups. Platforms such as social media, with all its positives, have created a hate culture which has been accepted and even encouraged by those in positions of power - we only have to look at the Twitter spat between Iran and the US only a few weeks ago. In a community like ours at Kendrick, we can see that it is not only our similarities, but our differences, which creates an environment that is as vibrant as this. Instead of searching for the things that divides us, we come together to celebrate the things that we all have in common and stand together in protecting the values of our community because this is our biggest strength. A Polish writer Zofia Kossak-Szczucka, was also a WWII resistance fighter, having co-founded two wartime organisations the Front Odrodzenia Polski and Zegota, which helped assist Polish Jews to escape the Holocaust. Just before she was arrested by the Germans and sent to the Auschwitz Concentration Camp in 1943, from which she survived, she wrote this:

In the Warsaw Ghetto, behind a wall that is cutting them off from the world, several hundred thousand condemned people await death. No hope of survival exists for them, and no help is coming from anywhere…

All perish: the rich and poor, the old, the women, the men, the youth, the babies…The world looks upon this murder, more horrible than anything history has ever seen, and stays silent. The slaughter of millions of defenceless people is being carried out amid general sinister silence… The perishing Jews are surrounded by Pilates who deny all guilt.

This silence can no longer be tolerated. Whatever the reason for it, it is vile. In the face of murder it is wrong to remain passive. Whoever is silent witnessing murder becomes a partner to the murder. Whoever does not condemn, consents…

We do not want to be Pilates… we protest from the bottom of our hearts filled with pity, indignation and horror. This protest is demanded of us by God, who does not allow us to kill… Every being calling itself human has the right to love his fellow man.

Perhaps the most harrowing aspect of this is the number of parallels that can be drawn between the events of 75 years ago and now. Millions of people have faced persecution or have sought refuge in other countries, to avoid the horrors that are inflicted on groups based on religious beliefs or sexual orientation; whilst billions of people have remained silent as the power of geo-politics prevails in prioritising economic benefit over unitedly confronting the perpetrators of some of the worst crimes against humanity ever conflicted.

As Holocaust Ambassadors, we both felt that the most important way to remind us of this lesson is to bring together the school community in order to remember not only the number of lives that were taken during the Holocaust, but stories of the lives that were taken away. In the coming couple of weeks, we have organised for a morning registration to be dedicated to allowing form groups to come together to look at stories of some of the individuals whose lives were shaped by the anti-Semitic sentiment which had swept across Europe. Already, the Year 9s along with Miss Long have organised their own commemorative project creating their own flame collage, which will complement the Holocaust display created by Ms Cavaciuti and Mrs Jones in the vestibule.

A debate is currently taking place as to whether we should maintain the buildings that make up the camps of Auschwitz-Birkenau, or let them crumble along with the last few survivors. But the lessons from Auschwitz have yet to be fully implemented; there is still some way to go. Reflecting on the mothers, fathers, brothers, sisters, that were robbed of their lives: it is not one that we can afford to let die out. What we have, though, is hope; hope that one day, by taking on these lessons, it is solidarity that will prevail in the face of hatred.